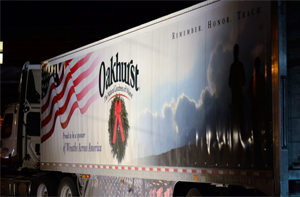 The Wreaths Across America journey continued on Monday, Tuesday and Wednesday. Joe Masse, a seasoned veteran in the driver’s seat of an Oakhurst tractor-trailer truck, was lucky to have Jeff Reinold join him on the second day of the Escort to Arlington. Reinold is a 35-year Sales Representative at Oakhurst also happens to be a United States Marine Veteran and served in the Vietnam War.

Reinold’s experience as a part of the WAA convoy started in Westbrook and ended in Kittery on Monday. He was touched by the display of patriotism at each stop along the way. “There were hundreds and hundreds of kids at some of these assemblies,” he said. “It was amazing how intuitive these kids were and they seemed to fully comprehend the purpose and mission of the Wreaths Across America program.” He continued, “Kids were cheering, Veterans were saluting, and people were saying thank- you” as Joe and Jeff rolled through towns where there was no planned stop. Reinold said, “I want to come back next year in a larger capacity. I just don’t feel like I did enough- I want to do more. It would be great to go to Arlington for the wreath laying ceremony.” After a day filled with pride and sentiment Jeff gave up his passenger seat to Joe’s grandson, Parker. 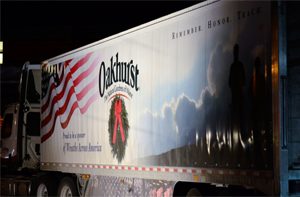 Parker continued on with Joe for all of Tuesday and Wednesday where he was able to see New York City for the first time. Parker was witness to only part of the Escort to Arlington route last year and missed out on the trip through New York City. It’s no surprise that Parker asked his grandfather if he could join him again, this time for a longer period of time. After two and a half days of driving, they traveled from Kittery all the way to Bordentown, New Jersey stopping a total of seven times for various assemblies and ceremonies. “The highlight was going to Ellis Island, we sailed right by the Statue of Liberty, which I had only seen in pictures. We also went to the Vietnam Memorial which was really well preserved and had murals on the wall and pictures from the time period,” Parker said.

There seems to be a common theme, here:

-Joe, who drove the Oakhurst truck last year, wants to continue to do so every year until it’s physically impossible for him to do so.

-Jeff who only experienced a small portion of the trip this year, wants to be involved again next year and in a bigger way.

Whether you are driving a truck that is transporting the wreaths, hitching a ride as a passenger, part of the convoy as a Patriot Guard Rider bearing a cold December road trip, attending one of the many ceremonious stops along the way, you can’t help but want to be a part of this powerful tribute again and again.

Stay tuned for the final blog post from the last leg of the journey. In the meantime, follow along on Oakhurst’s interactive map and watch the “Escort to Arlington” streamed live at http://waa.www.oakhurstdairy.com and be sure to take a look at the Dashboard Camera – you’ll feel as though you’re on the road with Joe and the rest of the convoy. Want to see who Joe has riding along with him? Check out the Cab Camera. [ED NOTE: Event is over for the year, so links have been removed. Stay tuned for next year!]

One Response to “Wreaths Across America: Part 2”