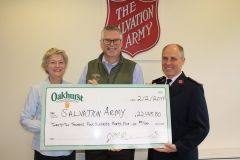 “Every year, we look forward to Egg Nog season and to the incredible generosity of Oakhurst and their loyal customers who purchase Egg Nog during the holidays,” said Major Everett Henry, Divisional Secretary, The Salvation Army. “Oakhurst’s unwavering commitment to our organization over the last 17 years has been simply remarkable ¾ it’s a valued relationship that we are grateful for because it truly helps us make a difference in the communities that need our help and support.”

Oakhurst has always requested that the funds it raises through the annual holiday fundraiser be directed to the communities where its loyal Egg Nog lovers purchase and enjoy their product in support of the program. The funds raised through this annual holiday tradition allow The Salvation Army to provide much needed practical assistance and programming, such as meals, after-school tutoring, recreational activities, and shelter for children and adults throughout Northern New England. The Salvation Army of Northern New England divides the funds between its 22 Corps Community Centers across Maine, New Hampshire, and Vermont, with The Salvation Army Massachusetts Division receiving a portion, too.

Each holiday season, Oakhurst makes a variety of Egg Nog flavors including its traditional Egg Nog, Light Egg Nog and its Buttered Rum Egg Nog. The company’s Egg Nog is made entirely with milk from Maine dairy farms. Since 2003, dairy farmers who supply Oakhurst with their milk have committed to take America’s First Farmer’s pledge not to use artificial growth hormone.

Oakhurst is Northern New England’s leading dairy brand and has stood behind every glass of milk and product for 96 years. While the FDA states there is no significant difference between milk from cows treated with artificial growth hormone, Oakhurst made history in 2003 when it asked its milk producers to take America’s First Farmer’s pledge not to use artificial growth hormone. Today, Oakhurst remains committed to the wellbeing of its community by contributing to local organizations that support healthy active kids and a healthy environment. The company produces milk and other dairy and juice products from its headquarters on Forest Avenue in Portland, Maine. In January 2014, Oakhurst became a wholly-owned subsidiary of Dairy Farmers of America, a dairy farmer-owned cooperative based in Kansas City, Kansas. For more information, visit oakhurstdairy.com.