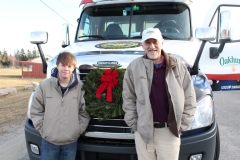 today it will donate transportation services for the fourth consecutive year to Wreaths Across America (WAA) and help deliver veterans’ wreaths to Arlington National Cemetery on Saturday, Dec.13, 2014. Driving again for Oakhurst this year will be Joe Masse, a 38-year Route Sales Driver from Springvale, Maine. WAA is a Maine-based non-profit that coordinates wreath-laying ceremonies at Arlington and more than 1,000 locations nationwide on National Wreaths Across America Day each December in support of its mission to Remember, Honor and Teach.

“Oakhurst’s enthusiasm for Wreaths Across America and its mission, and companies and supporters like them, are the reason we are successful,” said Karen Worcester, executive director of Wreaths Across America. “In addition to providing invaluable transportation services, their commitment also includes employee volunteers who will participate in the laying of the wreaths at Arlington. It is a simple gesture that means so much to the families of fallen soldiers.”

The 750-mile journey from Maine to Arlington National Cemetery begins on Sunday, Dec. 7, 2014, which also marks the 73rd anniversary of the attack on Pearl Harbor. The convoy of 11 trucks makes approximately 30 stops as it travels southward to honor the nation’s fallen heroes and their families.

Oakhurst’s Wreaths Across America Driver Joe Masse said: “Last year’s trip was incredibly humbling and something I’ll never forget. I’m incredibly honored that Oakhurst has asked me to be its driver once again so that I can be a part of this tremendous effort to honor those who have sacrificed so much for this country’s freedom. I’m also excited that my daughter and grandchildren plan to travel along with the convoy this year and will meet me in Washington for the wreath laying ceremony.”

As part of its ongoing support for Wreaths Across America, Oakhurst designed in 2011 a dedicated trailer that is used in daily operations and honors the organization’s mission. Because the trip to Arlington is so memorable, Oakhurst’s Information Services Team has developed technology, which allows everyone to experience the journey as if they were inside the cab of the truck. Live video during the drive to Arlington will be available via a dedicated website: http://waa.www.oakhurstdairy.com/. Images and media will be also posted to the company’s Natural Goodness blog and Facebook page.

“We were thrilled to be selected by the group to participate in the week-long ceremonial convoy to Arlington National Cemetery, said Paul Connolly, Vice President and Chief Information Officer at Oakhurst Dairy. “I would like to thank all the people here at Oakhurst that help us support this trip each year.”

Connolly continued: “As in past years, we will have our ‘real-time’ map on our website showing the convoy’s location along with a live dashboard and event camera. This technology has been a big hit each year for those that can’t be a part of the trip but want to track the journey.

The wreath-laying effort began in 1992 when Morrill Worcester of Worcester Wreath Company in Harrington, Maine, donated 5,000 evergreen wreaths to Arlington National Cemetery. Today, the annual weeklong pilgrimage from Maine to Arlington National Cemetery is known as the world’s largest veterans parade. Wreaths Across America expects to place more than 150,000 wreaths at Arlington, distribute wreaths to more than 1,000 locations across the United States, including 35 veterans cemeteries in Maine and New Hampshire, and overseas for ceremonies to honor America’s fallen soldiers and their families on National Wreaths Across America Day. In total, more than 600,000 wreaths will be delivered.